The jury has spoken.

Ahmaud Arbery was shot dead in Brunswick last February while he was jogging through the Satilla Shores neighborhood.

The twenty-five-year-old Black man was unarmed and out jogging when he was shot by 2 white men who claimed they thought he was a burglar.

The twenty-eight-second video shows Arbery jogging around a neighborhood in late February 2020. The footage tragically ends with 3 loud gunshots.

And after his death many people came together in protest… 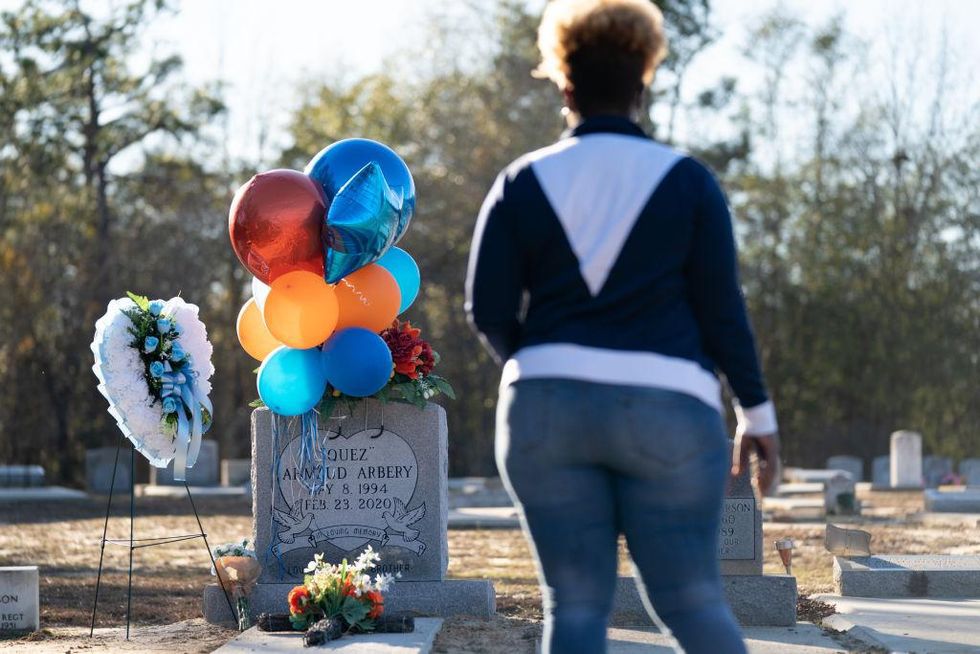 A large crowd marched through the area where Arbery was killed to call for this brutality to end.

Marcus Arbery spoke out about the death of his son at the time, as per ABC News…

Saying: “If my son killed the McMichael’s son, he would have been arrested on the spot.”

Marcus said his son, who was an aspiring boxer, was well known for jogging daily around the neighborhood.

My heart is broke for the family of Ahmaud Arbery. As a mother, my child is my child regardless of age, I can’t ima… https://t.co/SCiFnZ0xPx

“He took his body very seriously, always ran, and had pride in everything he did,” he said. “It cuts me deeply how his life was taken. I would have preferred them to come and take my life instead.”

Gregory McMichael, sixty-four, and his son, Travis McMichael, thirty-four, were arrested on May 8th 2020 for his murder.

It’s foul that 2 months following Ahmad Arbery’s murder, a video has to surface the internet and a petition has to… https://t.co/QBobqzlY9G

Following the GBI’s announcement of the arrests, Georgia Attorney General Chris Carr released a statement, saying: “This tragedy cannot be undone, but this is the first step in what I am confident will be a swift road to justice.”Sadly, it hasn’t been a swift road at all.

The McMichaels told police they grabbed their guns and got in their truck to chase Arbery after seeing him running in their neighborhood, believing he was responsible for the burglaries that had recently took place.

BREAKING: Greg and Travis McMichael, the retired police officer and son who shot and killed Ahmaud Arbery, a 25-yea… https://t.co/a7VA40rIxg

The 2 men fought over the gun before Arbery was shot, as seen in the video, which was later announced was recorded by William Bryan.

However, it quickly came out that Arbery wasn’t responsible for any crime, and was wrongly targeted…

People are wondering why the Ahmaud Arbery Trial is called that & not the McMichael & Bryan Trial? It’s because of mainstream media’s coverage on Black People murdered is rarely covered accurately.Btw this is the proper title hashtag #McMichaelBryanTrial. pic.twitter.com/mRFvpCJ6w2

No weapons were found on him either, according to the police report.

Since the original footage emerged… 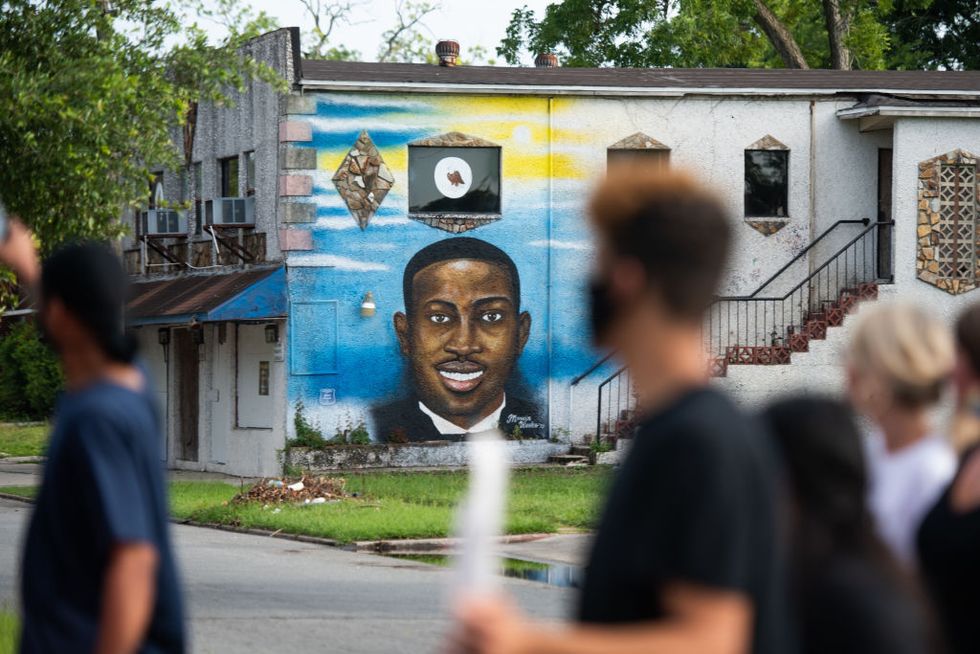 People were quick to point out that if it wasn’t for the recording, nothing would have been done about Arbery’s killing.

There was a loud call for justice…

There are three injustices surrounding #AhmaudArbery –

1. His murder.
2. The coverup and failure to prosecute his… https://t.co/5aiVHy1qum

And celebrities and politicians including Joe Biden, LeBron James, LL Cool J, and Kim Kardashian were among those who spoke out at the time.

We’re literally hunted EVERYDAY/EVERYTIME we step foot outside the comfort of our homes! Can’t even go for a damn j… https://t.co/r2yPGUnb8c

“We’re literally hunted EVERYDAY/EVERYTIME we step foot outside the comfort of our homes! Can’t even go for a damn jog man!”

“Stand with us and demand that Ahmaud’s murders are charged in his death. They are not immune from prosecution and should be tried for murder.”

I am so tired…and so angry…
Remember his name #AhmaudArbery

“Remember his name,” she wrote. 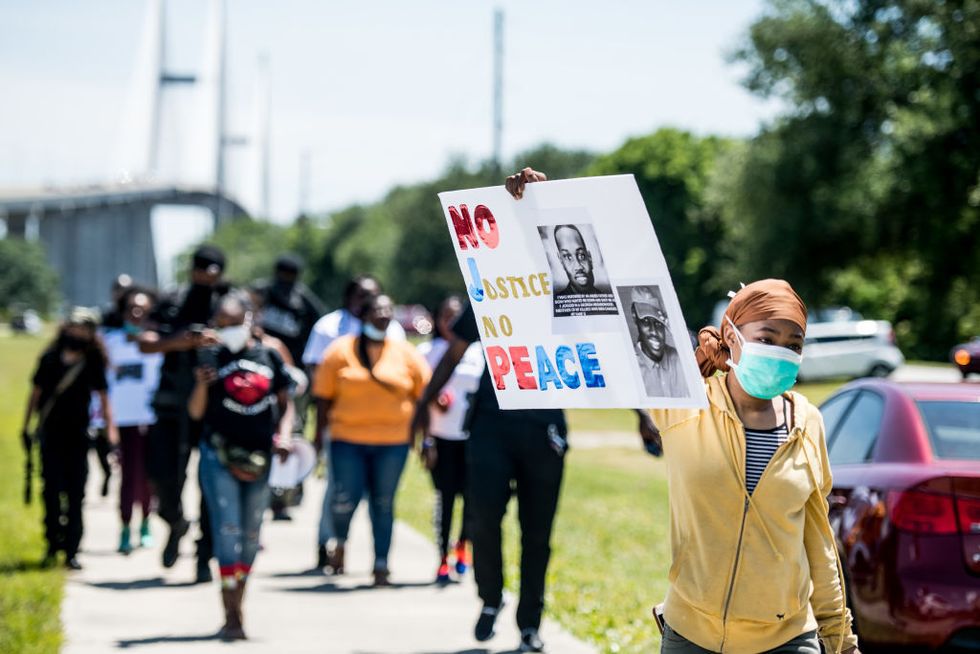 And during the interview with TMZ, she said she would like prosecutors to seek death penalty sentences for Travis and Gregory McMichael. “Coming from my point of view, my son died, so they should die as well,” she said. “I would like for all hands that were involved, that played a part in my son’s murder, to be prosecuted to the highest.”

The trial for Arbery’s case began last month, and over time some shocking revelations have been made…

Travis McMichael, the man that shot Arbery dead testified, admitting he never pulled out a weapon or threatened him in any way. 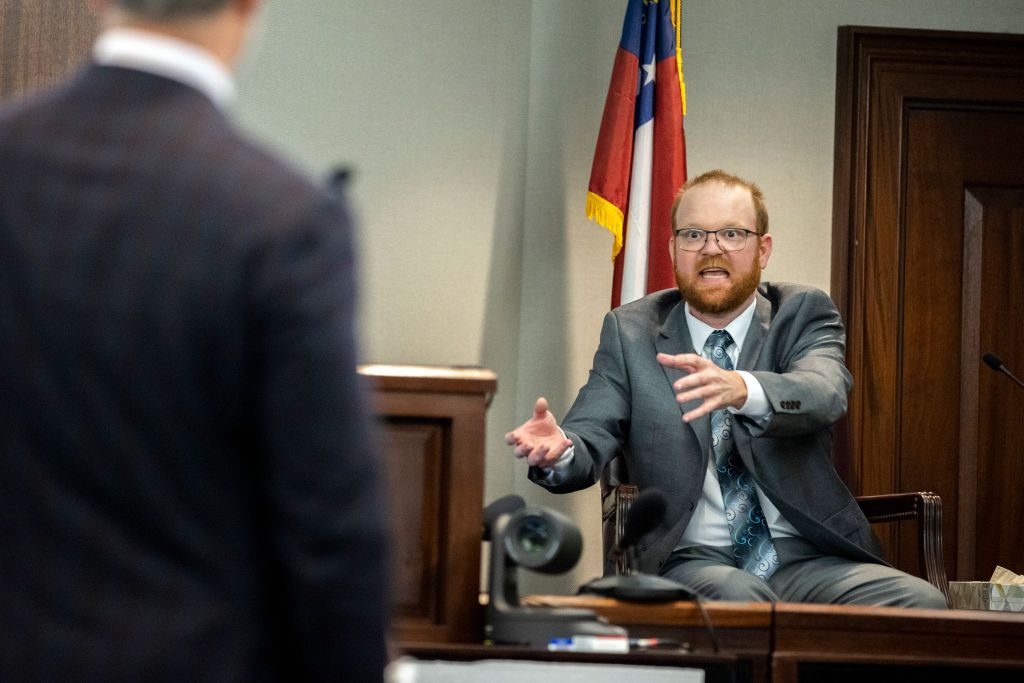 During the testimony, Prosecutor Linda Dunikoski asked McMichael if Arbery ever threatened him or tried to grab a weapon at all during the altercation…“No,” McMichael said.“He just ran?” the prosecutor asked.“Yes, he was just running,” McMichael said. 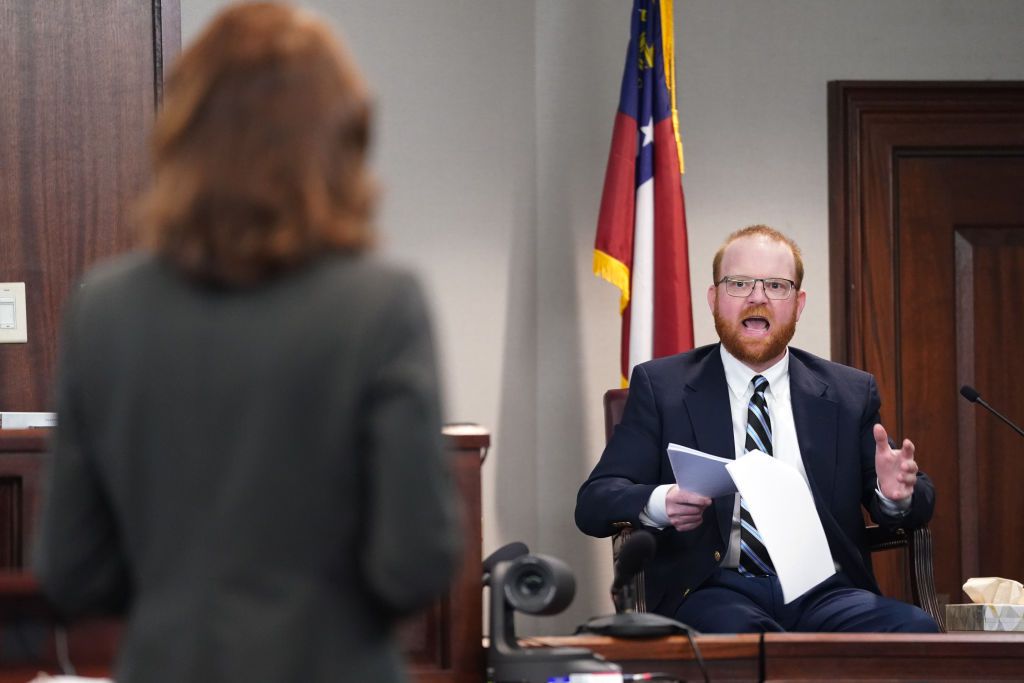 However, things quickly escalated and once McMichael managed to catch up to him, Arbery tried to disarm him, resulting in him firing his shotgun at close range.The defense tried to say Travis was acting in self-defense after Arbery tried to take his gun.

There’s no denying the trial has been a difficult time, particularly for Arbery’s family.

“The series of events captured in this video confirm what all the evidence indicated prior to its release— Ahmaud A… https://t.co/illKiqlPyY

But there’s one moment, in particular, that was so difficult for Arbery’s mom that she had to leave the courtroom.

Arbery’s mom, Wanda Cooper-Jones, has spoken out about the comment on her son’s physical appearance made by a defense attorney. 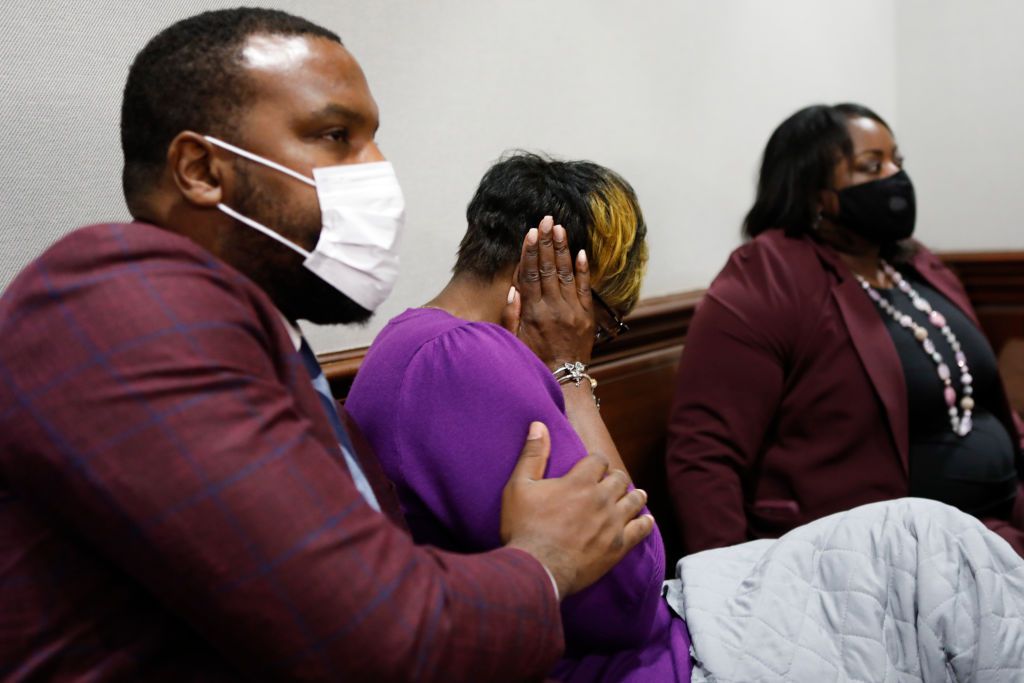 Cooper-Jones has spoken out after a defense attorney told the jury that Arbery had “no socks to cover his long, dirty toenails.” 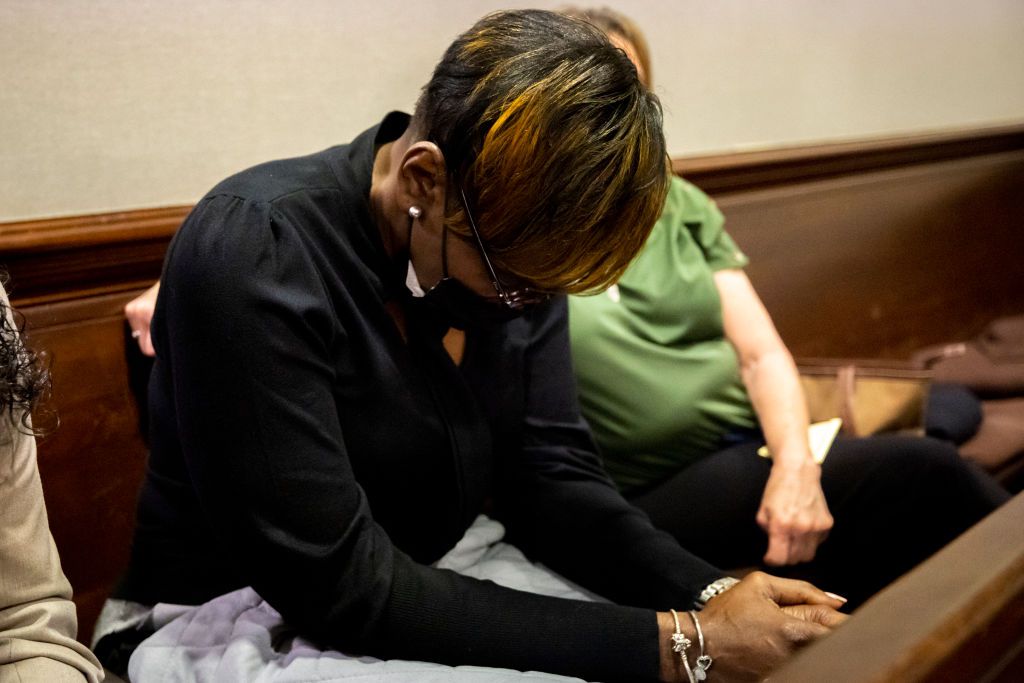 Speaking with CBS Mornings, Cooper-Jones revealed that she “didn’t expect them to go that low.”

She also added that her son “didn’t deserve to die” regardless of “how dirty his toenails were.” 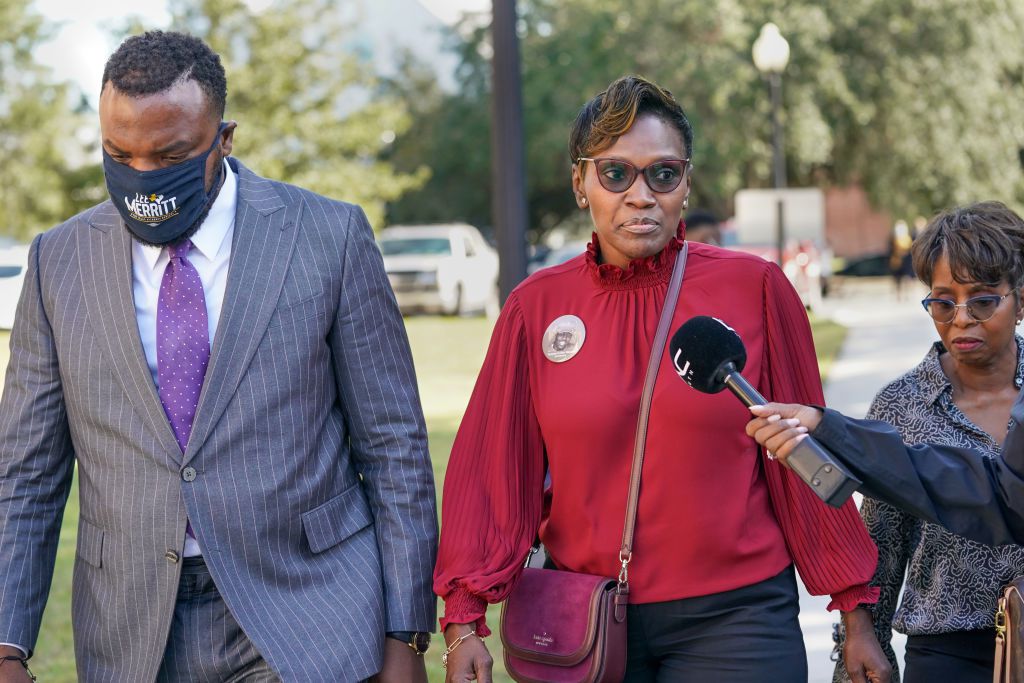 “I’ll just say this, regardless of how long and how dirty his toenails were, that’s still my son, and he didn’t deserve to die the way that he died.”

Now, the jury has made its decision.

Ahmad Aubrey can finally Rest In Peace. Finally, justice has been served, and his family family can have some sense of relief.💖💖 pic.twitter.com/8f4aKemjLa

The decision has all but ended the ambitions of the world’s No.1 men’s tennis player to contest the Australian Open and win a record...