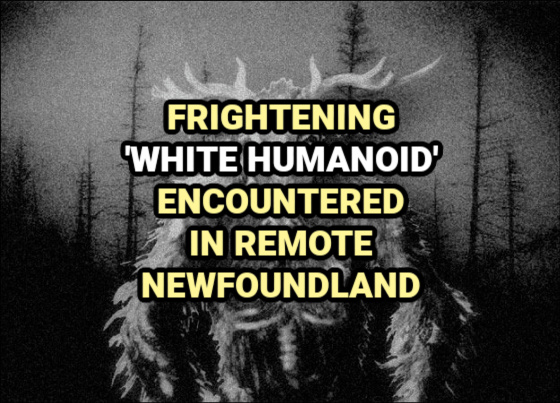 A group of friends in northeast Newfoundland, Canada, encounter strange sounds and an unknown white entity while exploring an abandoned location. Was it a Wendigo?

“I live in northern east coast of Newfoundland, Canada. I’ve heard people say that’s where certain kinds of creatures live but, as I previously stated, I know absolutely nothing about it.

There’s an area extremely deep into the woods, about 40 minutes away from where I live, so deep into the forest that you don’t really see anyone else. There’s a few smaller stores out that way but nothing really noteworthy. But if you walk deep into the woods there’s a path cars can’t drive through where a burnt up abandoned slaughterhouse is. Religious/spiritual people I know have said not to go there because it’s “cursed.” A First Nations friend filled me in on that he knows about the area, which he basically said he wouldn’t go there.

Over the weekend, a few friends and I were bored and decided we’d go check it out since we were in the area. Nothing happened. We just got some photos. It was a bit eerie. The days after we went to that place we’ve had random bad/unexplainable events occur out of nowhere.

But here’s where I think we had an encounter. Tonight we gathered the same group plus two other friends and drove back out there just to show them around to explore more and get better pictures. When we got there we heard, what we assumed was, the wind howling. But the longer it went on we realized the pattern didn’t match up with the wind. It didn’t make any sense for it to be howling like that it, sounding almost as if someone was whistling at us to get our attention. A few people pointed it out but we just chalked it up to being random sounds, possibly the wind was probably just blowing through something weirdly.

When we were in one of the secondary buildings a friend pointed out it looked like something was running around outside the main building. He was right. It looked like something very quickly moved across the front side of the building and the sound was back, but louder. We went outside and crawled through a section in the gate to get back to the main building. As soon as we made it through we heard a loud swinging sound, almost like a rusty door was being slowly opened and closed. Another friend and I were extremely put off by the sound and asked to go back to the car. But the others said they wanted to go into the main building. As we were walking up to the front of the building, a friend jokingly made a remark about us splitting up and exploring the building. As he said that we heard a series of loud banging, like something was running across the metal floor of the building towards the door. We quickly made it out of there and ran back towards the trail.

As we were running back towards the car, which isn’t exactly a short walk, we shined our lights back towards the buildings. The three of us looked back and definitely saw what appeared to be something completely solid white bipedal humanoid running down the trail. We got in the car and drove back to town as quickly as possible. I don’t think we’ll ever be going back.” SS

Because of recent revelations involving the winged humanoids (The Unseen Ones), we are asking the worldwide public to come forward with your sightings & encounters. Contact us at 410-241-5974 or at [email protected] – Thanks. LonListen to our podcasts at the ‘Beyond Explanation’ YouTube channel

Have you had a sighting of a winged humanoid or huge bat-like creature in the Chicago, Illinois metro area / Lake Michigan region? The entity has also been referred to as the ‘Chicago Mothman’, ‘Chicago Owlman’ & ‘O’Hare Mothman.’ – Chicago / Lake Michigan Winged Humanoid Regional Interactive Map – Please feel free to contact me at [email protected] – your anonymity is guaranteed. Our investigative group is conducting a serious examination of his phenomenon. We are merely seeking the truth and wish to determine what eyewitnesses have been encountering. Your cooperation is truly appreciated. You can call me directly at 410-241-5974 as well. Thanks. Lon Strickler

Your financial support of Phantoms & Monsters and our other pursuits is much appreciated. This all depends on you, the readers & followers.

Please use the PayPal donation buttons on the blog site. You can also go directly to Phantoms & Monsters donation. Thanks again for your loyalty and continued support. Lon

SUBSCRIBE NOW to ‘Beyond Explanation’…Phantoms & Monsters on YouTube – Also, the ‘Arcane Radio’ show archive is available at the same channel.