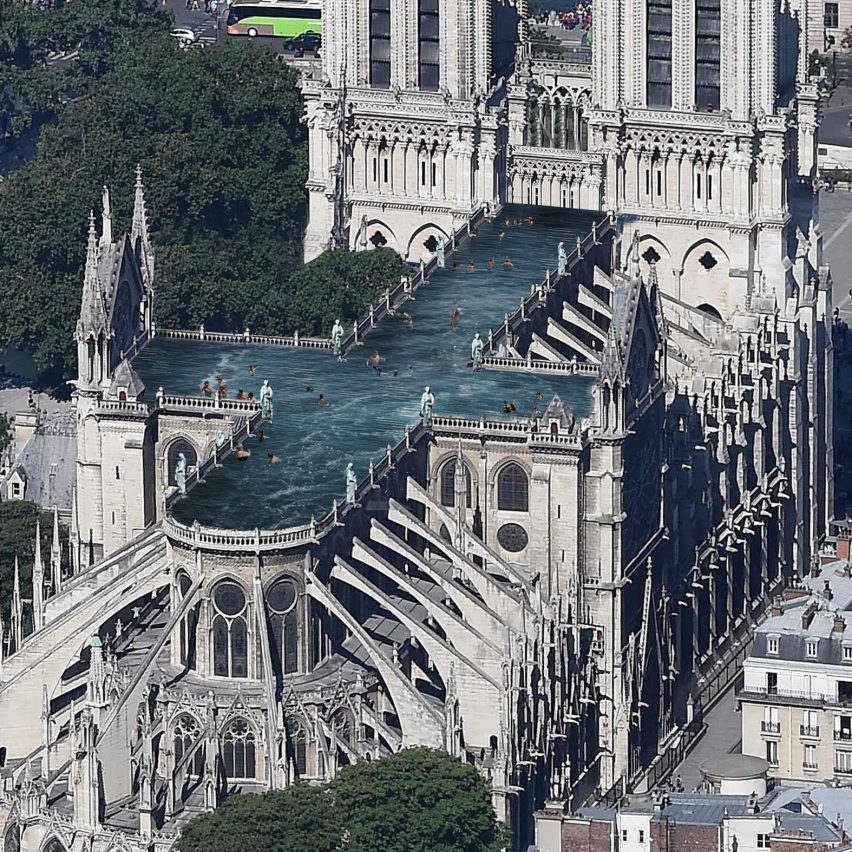 Since Notre-Dame Cathedral was devastated by fire last month, design proposals for rebuilding the roof and spire have got more and more ridiculous. Here are seven of the most far-fetched, including a car park, a swimming pool and a McDonald’s. 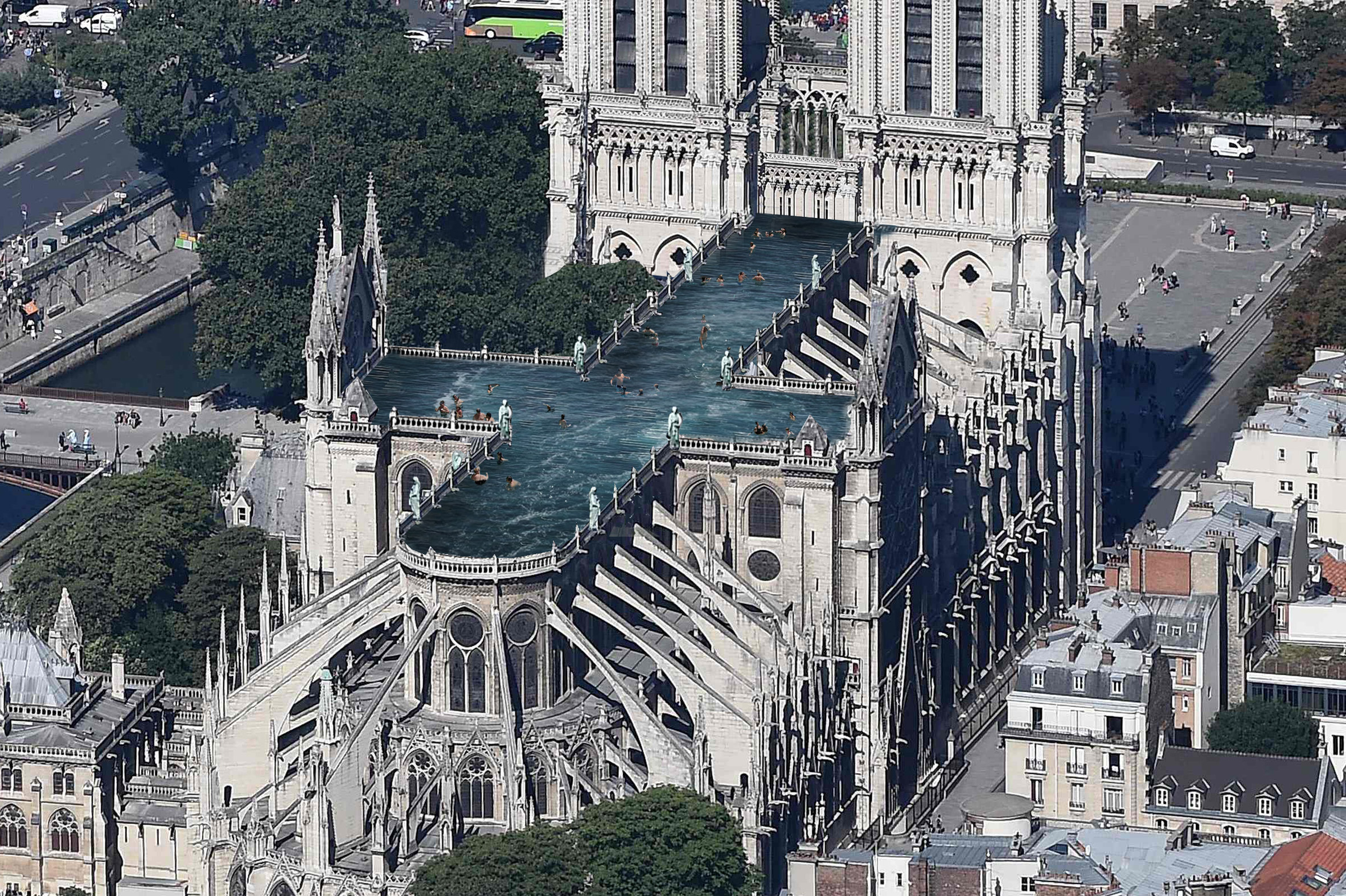 The Pool by Ulf Mejergren Architects

Rather than topping Notre-Dame with a park, as several designers have suggested, Stockholm studio Ulf Mejergren Architects wants to create a wetter type of public space on top of the cathedral – a swimming pool.

The open-air pool, which would have “unmatched views over Paris”, would be surrounded by the 12 statues of the apostles that were removed from the roof before the fire.

“Our addition is a complementary spatial experience to the building that will match the awe of the great interior; a space for thinking and self-reflection,” said the studio. 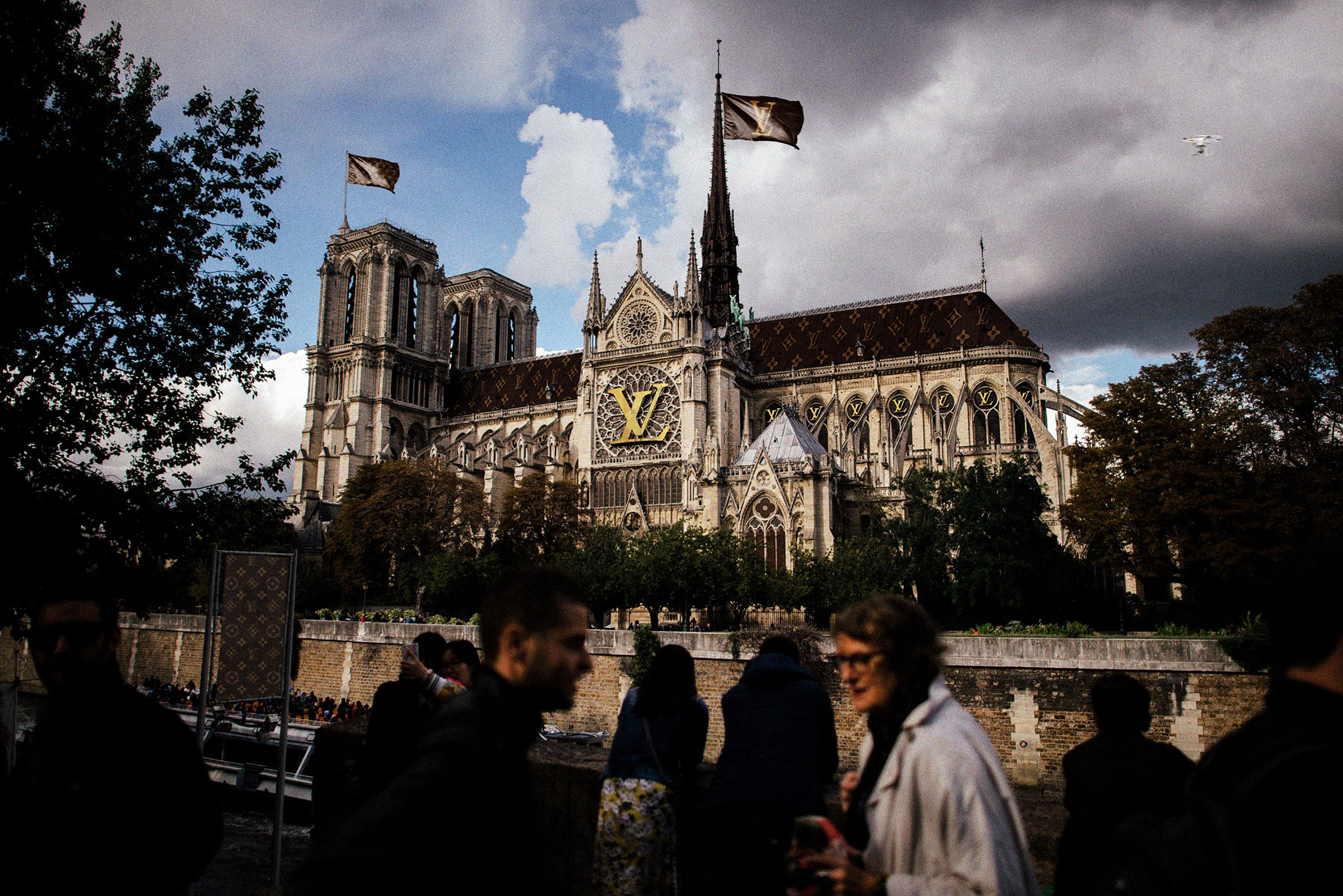 Pedro Ribs, art director at Brazilian studio Entrequadra Novas Mídias, has envisioned a Notre-Dame rebuilt by Moët Hennessy Louis Vuitton (LVMH), as a response to the corporation’s donation of €200 million to the cathedral’s renovation fund.

The project sees the cathedral rebuilt as it was before the fire, but with the Louis Vuitton print used across the roof and square in front of the west entrance. The Louis Vuitton Notre-Dame would be complete with the fashion brand’s logo placed over the rose windows, and on flags flying from its towers and rebuilt spire. 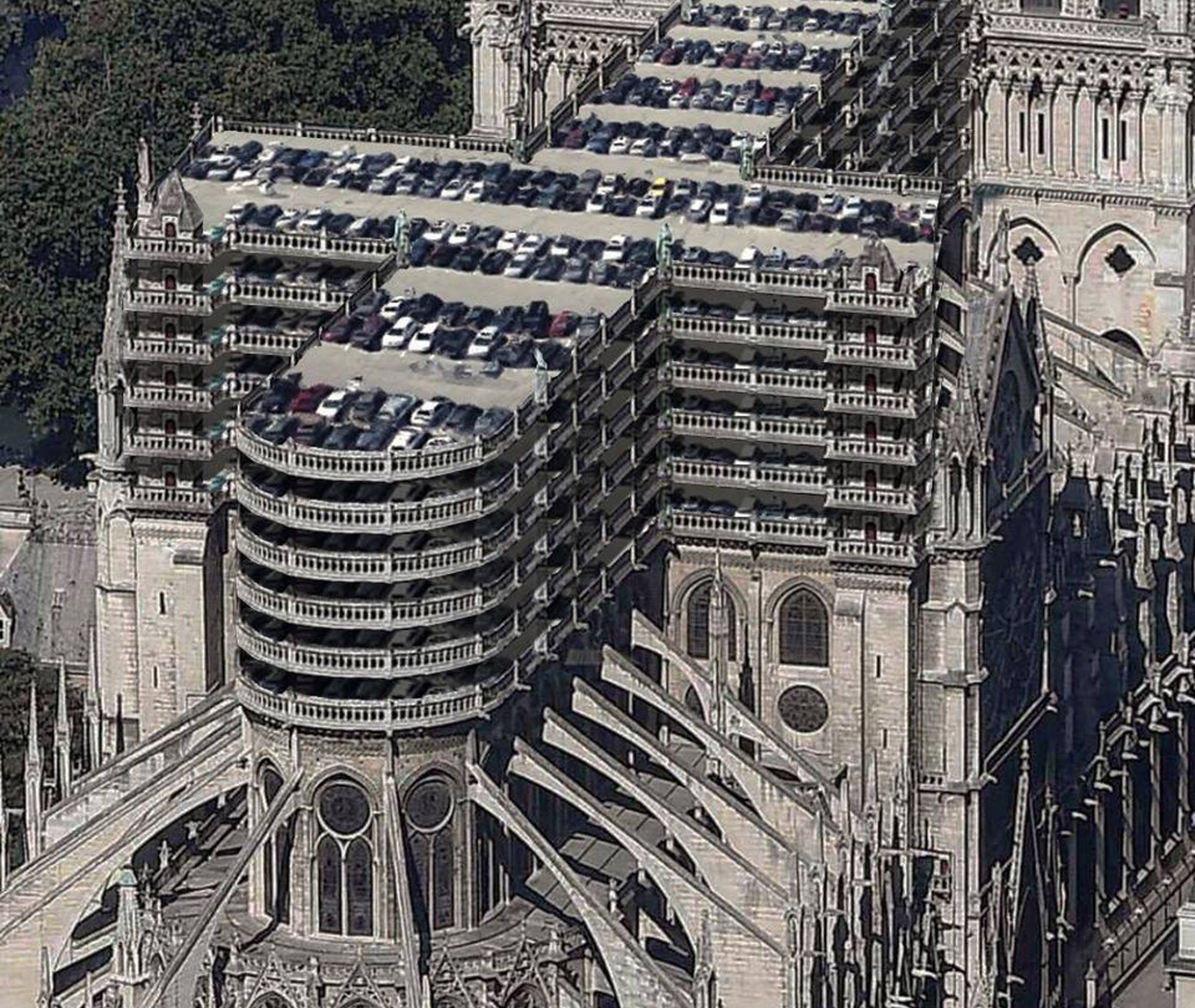 The Car Park by Unknown

A proposal to make use of the space above the cathedral for car parking, by an unknown designer, was published on Trust Me, I’m an Architect’s Facebook page.

The multi-storey car park may have been designed in response to Miysis Studio and Vincent Callebaut‘s proposals for Notre-Dame. “When green roof and glass roof proposals are too mainstream,” said the caption alongside the post. 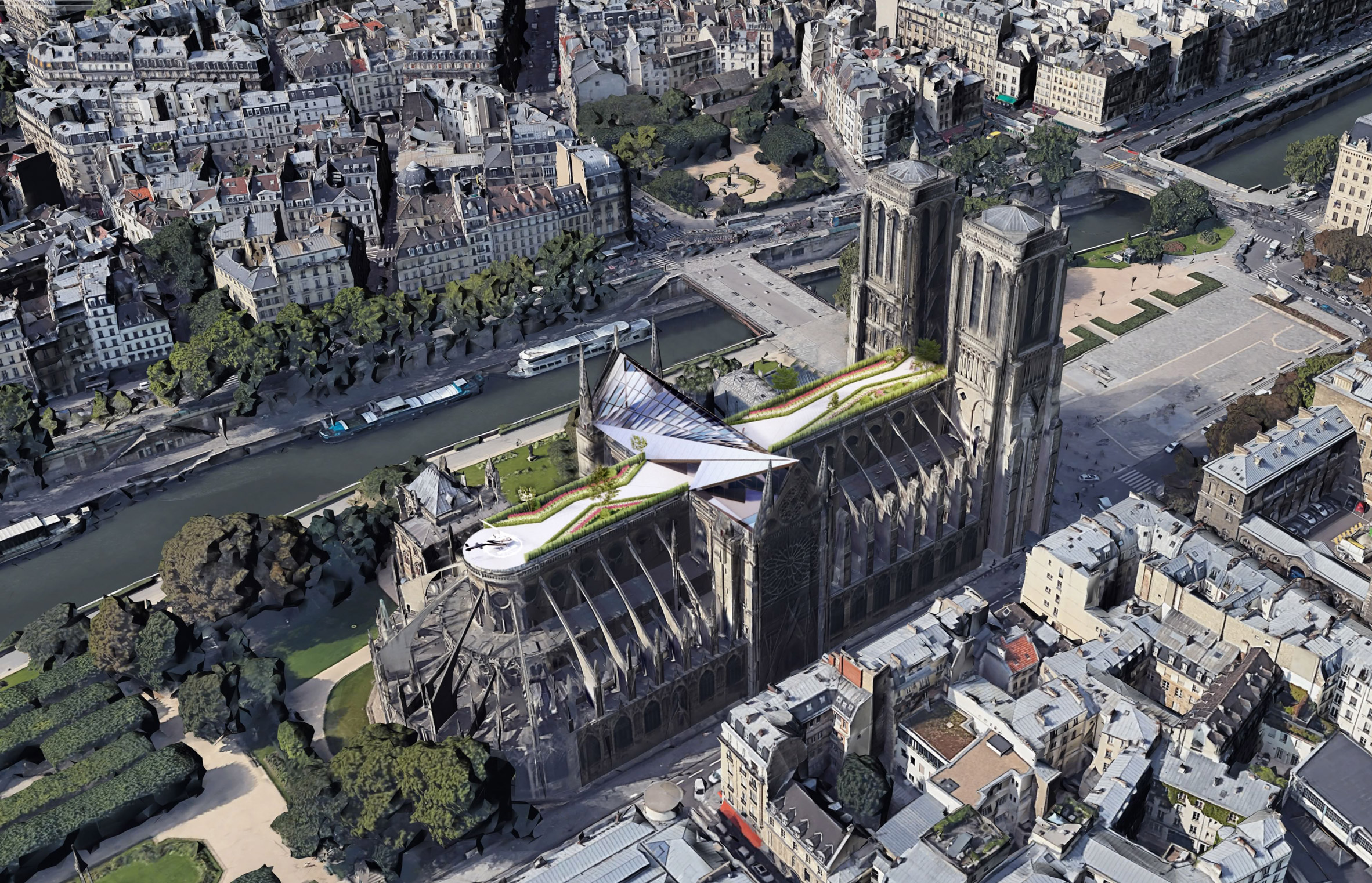 Quasimodo’s Penthouse by Who Cares Design

Who Cares Design has proposed building a rooftop villa for Quasimodo – the fictional protagonist of Victor Hugo’s book The Hunchback of Notre-Dame – on top of the cathedral. The penthouse, which would stretch across the cathedral’s crossing, is designed to replace Quasimodo’s previous home in Notre-Dame’s attic.

“The Hollywood star Quasimodo, by now rich and famous thanks to the royalties from countless movies about him and his story, has already dreamed about changes to his housing conditions for several years,” said the studio.

“Finally, he can follow his dream of more comfort, light and a green rooftop garden.” 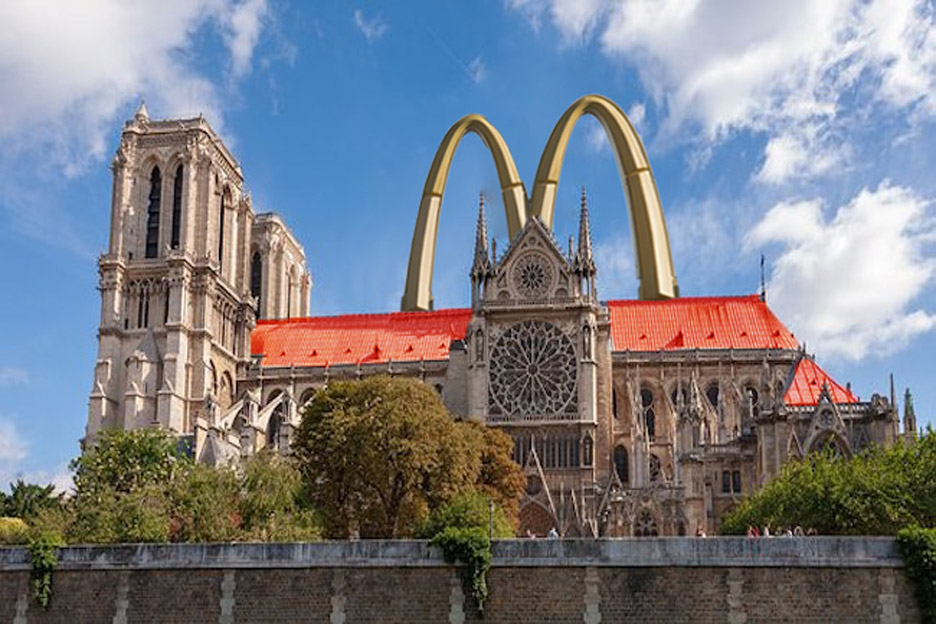 Could Notre-Dame be turned into the world’s largest fast food restaurant? A visual created by unknown designer, which was posted on Reddit, would see the cathedral turned into a McDonald’s.

The cathedral’s roof would be rebuilt in red, to match the roofs of the fast-food chain’s typical restaurants, while the spire would be replaced with the Golden Arches – a large yellow M, which is the company’s logo. 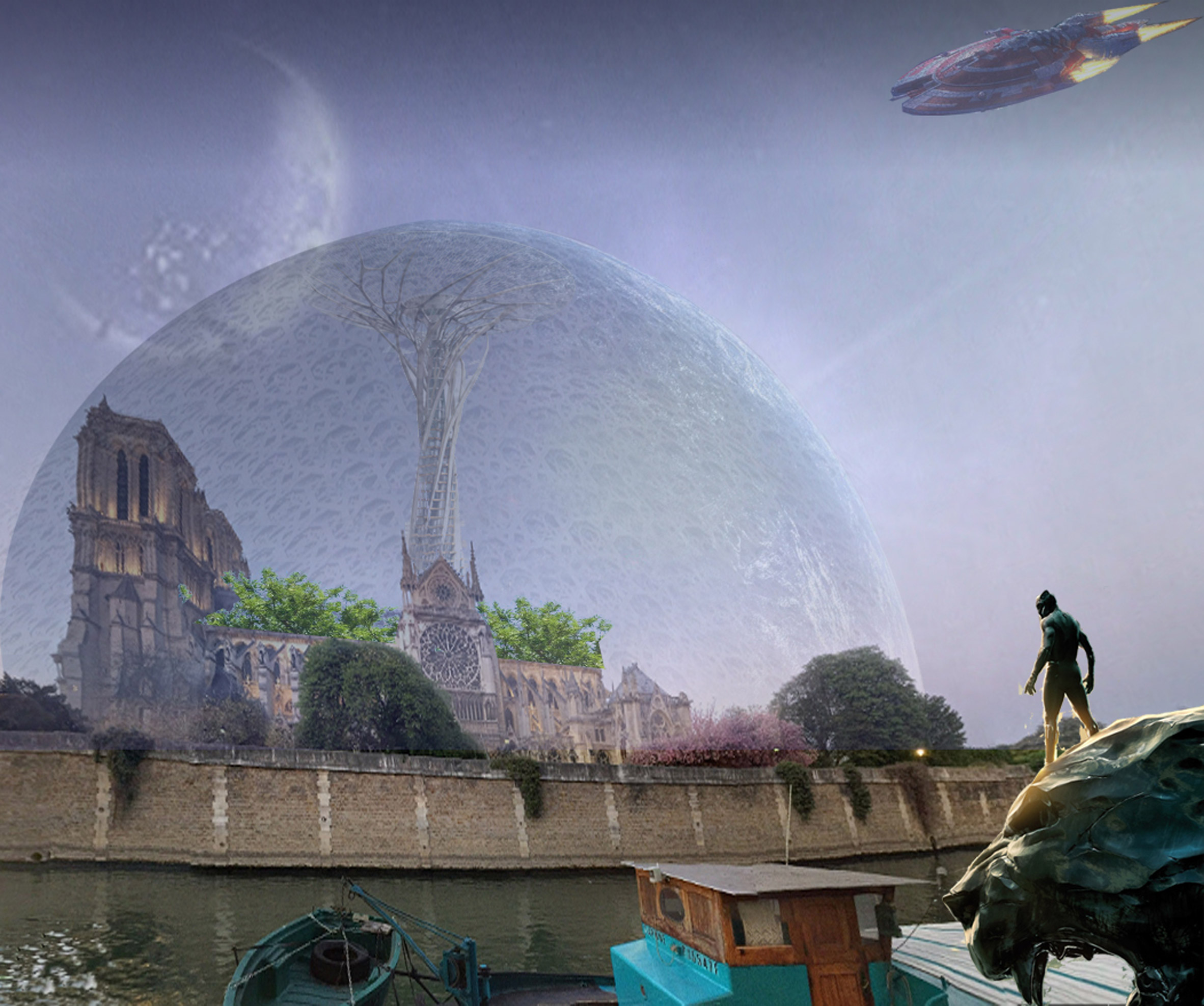 The Dome by Juan Françisco Ronda

Designer Juan Françisco Ronda envisions Notre-Dame being turned into a monument to peace. The building would be enclosed in a translucent dome supported by a column that sprouts from the cathedral’s crossing.

“Erect a place of peace where everyone is to believe (or not) what is best for you!,” said Ronda. “Here is only momentary reunification when an attempt is made or sacrilege, seek peace and thus translate this movement.” 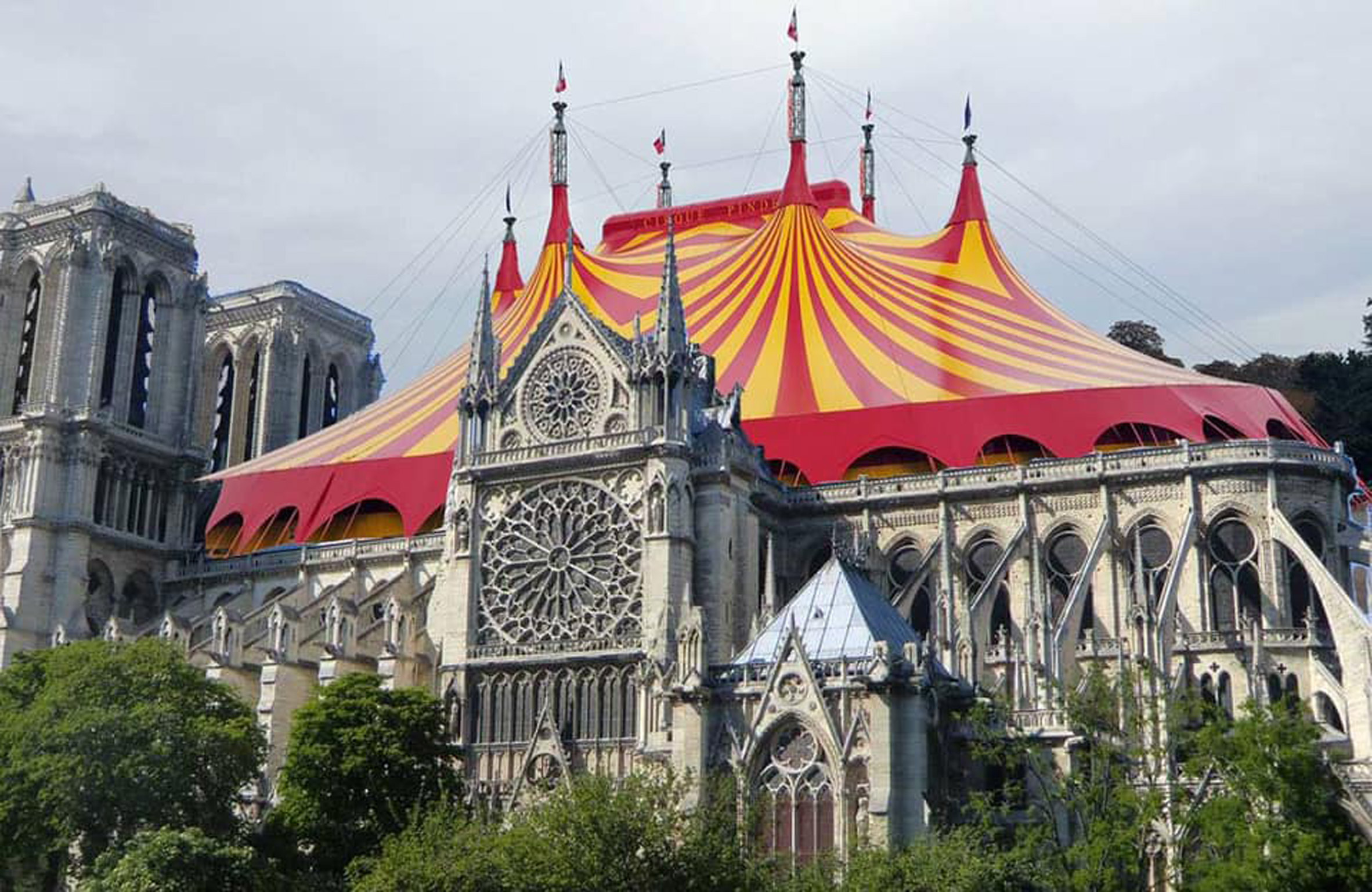 The Circus by Unknown

Another design published on Trust Me, I’m an Architect’s Facebook page perhaps references the circus that now surrounds rebuilding.

The design would see the whole building turned into a giant circus, with the roof replaced with a big top.

If you are the designer of one of the unknown projects, please contact Dezeen and we will credit appropriately.

The post Seven of the most outrageous proposals for Notre-Dame appeared first on Dezeen.