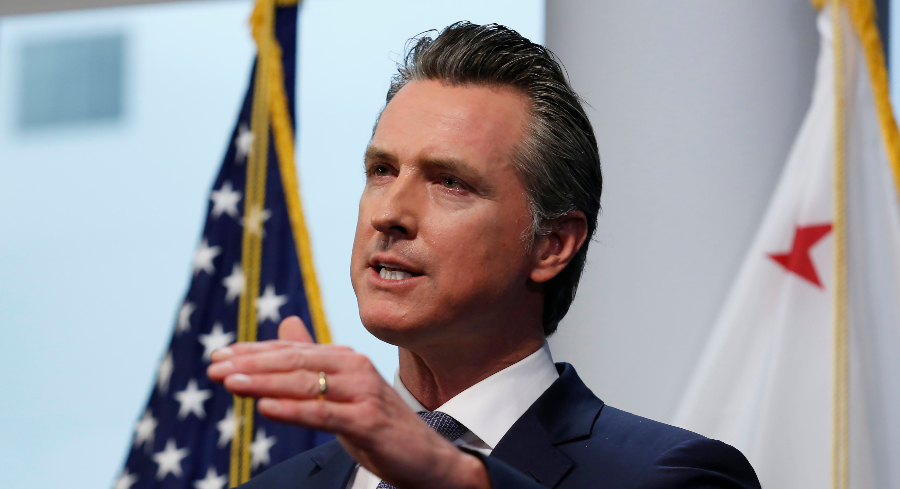 SAN FRANCISCO — States stricken by coronavirus outbreaks had a common response to the new $2 trillion stimulus package: We need more.

Elected officials say they’ll need more dollars to sustain struggling businesses, to offset the massive burden on healthcare infrastructure and to protect individuals who are out of work and fearful of losing their homes. They were already highlighting those needs before the Senate approved a $150 billion state relief fund, underscoring fears that a cataclysmic economic hit to state and local governments could cripple health systems and keep businesses shuttered while imperiling peoples’ homes, healthcare and ability to provide for their families.

Some governors, facing near-unprecedented declines in state revenue, say they can’t even afford to keep their own governments up and running without another injection of cash.

“I was shocked that they were so irresponsible in addressing the state and the city need,” New York Gov. Andrew Cuomo said in a press conference Thursday morning, hours after the Senate passed the bill in a unanimous late-night vote.

New York, which has quickly become the new global epicenter of the pandemic, will get at least $7.5 billion once the legislation is signed by President Donald Trump, according to the National Conference of State Legislatures.

The support the bill provides to other states varies. California will claim the largest outlay from the $150 billion relief pot, at $15.3 billion, according to the National Conference of State Legislatures. New Jersey will receive $3.4 billion; roughly $4.9 billion will flow to Illinois; and Florida will draw some $8.3 billion.

That’s on top of a $25 billion outlay for public transit agencies, $30 billion for education and $45 billion for the Disaster Relief Fund, which can help local governments cover the cost of responding the public health crisis.

But even lawmakers who voted for the bill — and celebrated its passage — said the record stimulus wasn’t going to enough to cover the nation’s needs.

“This was not what we wanted. It is not enough,” Sen. Kamala Harris (D-Calif.) said on MSNBC, pointing to the need for more paid sick leave, aid to the newly uninsured and expanded food stamp benefits “for families that need to feed their children.”

In Harris’s home state of California, Gov. Gavin Newsom — who has put his long-running feud with Trump on an extended hiatus — said the federal relief “will be very helpful and will be very timely,” in particular money to purchase medical equipment, a $10 billion block grant to his state and augmented monthly unemployment payments.

But he said it won’t be enough to handle a coming surge of patients, make whole the more than one million Californians who have applied for unemployment in the last two weeks and save businesses facing annihilation.

New Jersey Gov. Phil Murphy, who has also been reluctant to criticize Trump in recent week, said Wednesday that the stimulus package is a “big step in the right direction,” though he said “it is not” everything the state wanted — a gap Murphy used to reiterate is push for a new tax on top earners.

“Reliable recurring revenue is the most important revenue you can have,” Murphy, the chairman of the Democratic Governors Association, said at a press conference Thursday. “Our revenues are getting crushed right now, which is why this federal bill is so important to us, and it’s not the last amount of support we are going to need.”

Illinois Gov. J.B. Pritzker, who has vociferously denounced the federal government’s handling of the pandemic, called the stimulus bill “progress“ and “a win,“ but he too said more must be done.

"We are doing everything in our power to get the supplies we need and equipment we need and expand hospital capacity," Pritzker said.

In Massachusetts, Republican Gov. Charlie Baker did not say whether the federal stimulus package will provide enough support to Massachusetts as jobless rates soar, but said every state will struggle to process the increase in unemployment claims. Experts say the unprecedented burden that’s resulted from social-distancing measures — a record 3.8 million Americans applied for benefits last week, according to figures released Thursday — will push many state unemployment funds toward insolvency without federal help.

"This is going to be one of the biggest challenges that states are going to face over the course of the next several weeks," Baker said.

California Budget and Policy Center Executive Director Chris Hoene said Congress forged "a pretty balanced package." But he pointed to basic needs like housing and food as “the most glaring items” not sufficiently addressed by Congress, where Democrats’ push for an expanded food stamp benefit did not make it into the final bill.

And soaring housing costs were already straining households nationwide, but particularly in California, even before widespread economic pain exacerbated their struggles to make monthly payments and created a clear need "for some kind of homelessness strategy" going forward, Hoene said.

“The dramatic impact is phenomenal and we need emergency rental assistance,” said Lisa Hershey, executive director of Housing California. “The lack of affordable homes and the situation on our streets was already dire before Covid-19.”

Hospitals, physicians and nurses around the country are bracing for a massive influx of coronavirus-positive patients that will test the capacity of already-strained healthcare systems. Healthcare professionals said the extra money will undoubtedly help them manage.

But Health Access California Executive Director Anthony Wright pointed to broader pressures on the system stemming from the economic fallout. Clinics are struggling to stay afloat amid a loss of non-coronavirus-related patients, and a swelling cohort of newly-jobless people will turn to public healthcare systems after losing employer-managed insurance. Both could use infusions in another bill, Wright said.

“There is gladly some money to the health system to deal with unanticipated costs in [personal protective equipment] and other needs, but what we’re hearing from the health system is significant,” Wright said. “This crisis exacerbates the gaps that already existed,” he added, “and if we don’t fill in those gaps it will be a lot harder for the public health efforts to contain the coronavirus to be successful.”